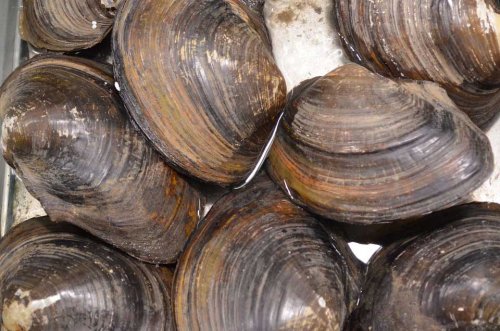 START’s second Natural Nutrient Control Program is our funding support for the Sarasota Bay Watch’s Clam Seeding program in Sarasota Bay. The Southern Quahog Clam is a native species to our coastal waters and like oysters described above have been decimated by urban growth and declining water quality. Like oysters, they are a formidable natural ally in improving water quality. Young adult clams can filter from 9 to 12 gallons of seawater a day.  As they mature and grow larger, their capacity increases and they can filter as much as 20 gallons of water a day. In addition, clams have a long lifespan of thirty years or more, and they are very resistant to red tide. They also move around in the sediment which improves the terrain for seagrass.

Since its initial seeding project back in 2016, The Sarasota Bay Watch has placed over 1 million clams in different locations in Sarasota Bay. With an average filtering capacity of 10 gallons a day, this means that the clams seeded in this program are filtering over 10 million gallons of seawater in Sarasota Bay every single day. 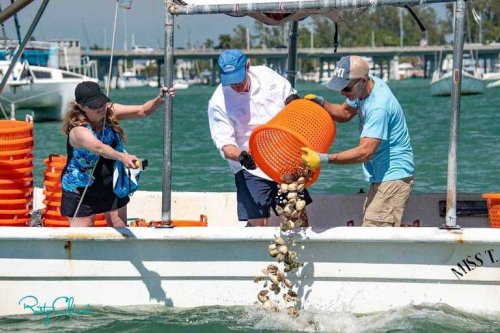 The program also included a landmark restoration of 93,000 larger, more mature clams at the Pier in Bradenton Beach. The seeding was sponsored by the City’s Community Redevelopment Authority (CRA) with a major assist from Gold Coast Eagle Distributing via the use of their refrigerated truck and Robert Baugh of the Chiles Restaurant Group who gave the clams a safe passage from their breeding grounds down in Charlotte Harbor. This was a combined community action including volunteers from the Sarasota Bay Watch, commercial clam farmers and commercial watermen from Cortez. As shown above, the volunteers used their boats to take the clams from the refrigerated truck to the seedings grounds near the Pier.

The Bradenton Beach seeding project is an innovative expansion of the program because it involves older, broodstock clams that survived the recent red tide bloom that plagued the Gulf Coast for over a year. Because the clams were raised during the red tide bloom, they could not be harvested at their smaller, more marketable size for restaurant use. As they grew larger and larger, they would have been considered to be too tough for normal half shell consumption by restaurant diners and relegated to lower priced “Chowder Stock”.

While the larger, broodstock clams are of less value as a food source, they are especially desirable for clam restoration. Their larger size makes them virtually predator proof and they can filter over 20 gallons of seawater a day or nearly twice as much water recycled by the smaller clams typically used in restoration projects. In addition, they are called broodstock because these females will each release from 16 to 24 million eggs several times a year to help repopulate the Bay with clams.

This innovative project also offers our economically challenged clam farmers a valuable source of income to counter balance some of the lost revenue from the ravages of red tide. They now have a new secondary restoration market for their more mature clams. With the growing recognition around the state of the value of oyster and clam restoration projects to improve the water quality in our coastal waters, the restoration market will undoubtedly grow as a meaningful source of revenue for our clam farmers.

By the end of 2021, the seeding program had established four different clam populations in Sarasota Bay. Two in Manatee County near Long Bar Point and Bradenton beach and two in Sarasota County near Van Wezel Auditorium and near City Island. The Bay watch is now raising funding to seed another million clams in the Bay during 2022.