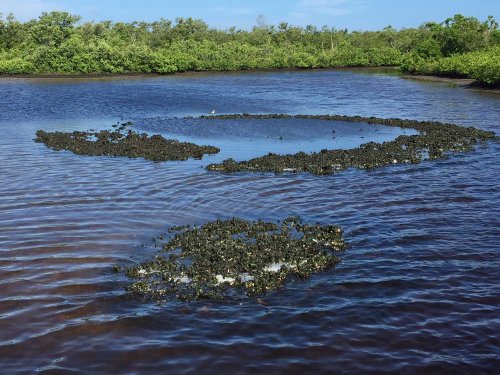 In the early 1800’s the Manatee River was called the Oyster River because of the many oyster reefs lining its shores. Many of the visitors in that era remarked about the impressive density of our oyster reefs. Over the years, however, harvesting for restaurants, dredging to improve navigation and ultimately dredging to provide fill for road beds eradicated over 90 % of the oysters along the Sun Coast.

Restoring our local oyster population is a top environmental priority because of the critical role they play in improving water quality and supporting other species. One mature oyster can filter from 9 to 50 gallons of seawater every day. That helps remove nitrogen and phosphorus that clouds the water column and can feed red tide and other harmful algae blooms (HABS). Clearer water allows more sunlight to penetrate the surface helping to grow more and healthier seagrass, another key species for improving water quality.

Oysters are called “environmental engineers” because their reefs provide habitat for other sea life like crabs and shrimp that attract many species of game fish. Their reef structure helps prevent shoreline erosion which reduces the nutrients entering the waterways. Oyster reefs also naturally grow in relative height to match sea level rise that can result from climate change.

Given oysters’ important multi-faceted role in our marine environment, START helped launch the Gulf Coast Oyster Recycling and Renewal (GCORR) program in 2017 to bring back this vital species to our waterways. Other organizations joining START in the partnership included the Chiles Restaurant Group, the Manatee County Department of Parks and Natural Resources, the Gulf Shellfish Institute and the University of Florida IFAS/Sea Grant program.

The restoration model adopted by the GCORR Partnership was provided by Robert Baugh of the Chiles Restaurant Group based on his experience with an oyster restoration program with restaurants in Charleston, South Carolina. Used oyster shell from diners was saved by the restaurants, collected by a garbage carting company and stored in a holding area for the shell to cure before being placed in the water to form the structure for a new oyster reef.

Our GCORR Program began with just the three Chiles Restaurant Group participants, The Beach House, Mar Vista Restaurant and Dockside Pub and The Sandbar. With a grant of $5,000 from the Tampa Bay Estuary Program, we were able to buy a trailer to pick up the shell from the restaurants and take it to a storage area donated by Manatee County at nearby Perico Preserve. The hauling of the shell was done by Robert Baugh, his son and other Chiles Group volunteers. Over the course of a year, Robert and his team kept 30 tons of restaurant shell out of the landfill as garbage and stockpiled it at the storage area to build new oyster reefs. Monitoring the results of the program, the Gulf Shellfish Institute determined that the “Fresh” restaurant shell produced 23% more new oyster spat than the quarried fossil shell commonly used for oyster restoration projects. 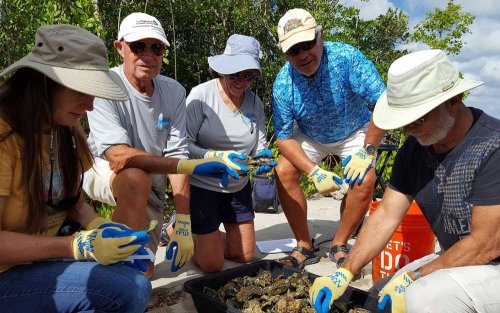 With our goal to expand this successful restoration program to more restaurants, START was able to negotiate a favorably priced carting contract with Waste Pro USA. With professional carting available, the Chiles Restaurant Group was able to interest five other environmentally motivated restaurants to join the GCORR Partnership. The eight shell-saving restaurant program is called Shuck ‘N Save and we encourage you to patronize these participating restaurants whenever you can: 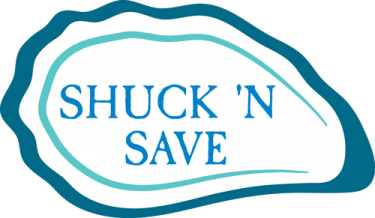 The restaurants in alphabetical order are:

Each of these restaurants is paying their own extra garbage fee with Waste Pro USA to keep the shell from their diners out of our landfills and saved to build new oyster reefs. With an estimated annual volume of over 50 tons, this makes the Shuck ‘N Save program in Manatee County the only completely self-sustained shell-saving restaurant program without a government subsidy in Florida.