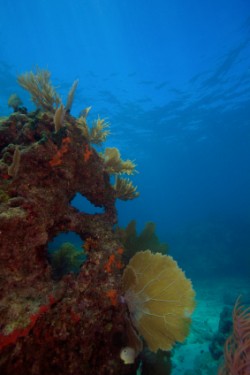 A federally funded, multi-agency effort has begun on the largest coral reef restoration project in history.  NOAA funded scientists with The Nature Conservancy and partner organizations including Mote Marine Laboratory, began growing staghorn and elkhorn corals at eight underwater nurseries located from Ft. Lauderdale south through the Florida Keys and U.S. Virgin Islands in 2009.  The project initially aimed to grow 12,000 coral colonies but instead raised 30,000.

Staghorn and elkhorn coral were chosen as they are the most important to the reef system and since 2006 have been listed as threatened under the Endangered Species Act.  These corals have suffered serious decline in the Florida Keys since the 1970s due to disease, coral bleaching and hurricanes.

The corals raised in the underwater nurseries will be transplanted to reefs stretching from the Florida Keys to the U.S. Virgin Islands by the end of this year.  Scientists hope the corals will help repopulate the damaged reefs. Reef colonies provide important fish habitat and tourism destinations.