Request From Mote Laboratory: Please Watch Out For Marine Life During the Summer Boating Season

These incidents offer a strong reminder that we share our coastal waters with the animals that live there and that everyone must do their part to help keep wildlife safe.

Mote recommends that boaters follow Coast Guard-approved safe boating guidelines and keep a close eye out to avoid striking dolphins, manatees and sea turtles. Mote also urges beachgoers to take special care to respect sea turtles and their nests on local beaches, which were hit hard recently by flooding and erosion due to Tropical Storm Debby.

Sea turtles and marine mammals like manatees and dolphins are all protected under federal law. Below we offer some summer updates on these animal populations, along with tips on how you can help keep wildlife safe during boating season. 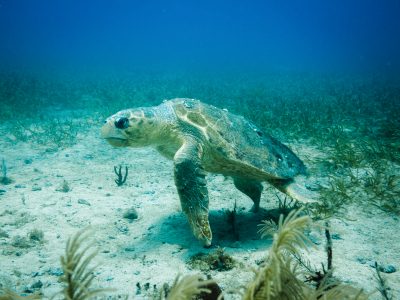 Turtles
Recent stormy weather damaged, destroyed or concealed a majority of sea turtle nests from Longboat Key south through Venice, according to preliminary reports from Mote Marine Laboratory scientists who continue to document the impacts of Tropical Storm Debby. Until Debby, nesting numbers were looking great, with more nests laid between April and June 2012 than during all of the 2011 nesting season. Sea turtle experts hope that the high number of nests laid so far this year on local beaches will help offset losses from the storm.

Dolphins
During late spring and summer, the resident bottlenose dolphins of Sarasota Bay are busy giving birth to calves. As of June 29, at least eight calves have been born this year in the Bay — including the granddaughter of Nicklo, the Bay’s oldest dolphin. Unfortunately, two of the calves have been seen bearing recent wounds from boat strikes.

“We’re in the height of calving season, so it’s especially important to be vigilant while boating,” said Dr. Randall Wells, director of the Sarasota Dolphin Research Program, a collaboration between the Chicago Zoological Society and Mote. “Historically, the period of heavy boat traffic around the Fourth of July has been when most boat strikes on dolphins have occurred, typically involving mothers and their naive calves.”

About five percent of local dolphins have boat scars, according to Program scientists, who have closely monitored this population for 42 years, making it the world’s longest-running study of a wild dolphin population.