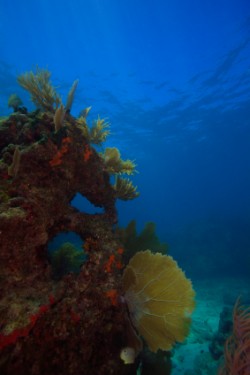 Coral reefs are essential to millions of plant and animal species in our marine ecosystem. Over the past three decades, coral reefs in the western Atlantic and the Caribbean have been damaged by diseases, storms and coral predators. Warm ocean temperatures have bleached out the coral and additional ecological decline has caused sea urchins and plant eating reef fish to vanish to be replaced by snails and worms that bore through coral skeletons. Reefs around the globe are being degraded by overfishing, pollution and coastal development.

In an effort to turn things around conservationists are seeding reefs by planting fast growing coral species off the shores of Jamaica, as well as in Caribbean islands from Bonaire to St. Croix. While some doubt the effectiveness of the plan, conservationists say inaction is not an option. The International Union for Conservation of Nature, say that live coral coverage on Caribbean reefs is down to an average of just 8 percent from 50 percent in the 1970s.

Scientists point to the Caribbean Sea as an example of why inaction is not an option. It has nearly 8,000 square miles of coral reefs. They protect the tropical islands fragile coastlines by absorbing energy from waves during hurricanes. Financially, the reefs are important to the multibillion dollar beach tourism and commercial fishing economy. Advocates say the reef restoration work can boost rates of recovery and improve the outlook for coral.