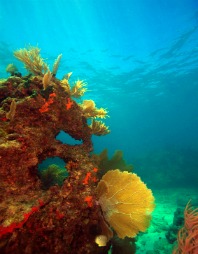 Mote Marine Laboratory scientists recently published a study in the journal “PLOS ONE”, that showed baby corals of some species are vulnerable to Deepwater Horizon oil and are especially likely to die when exposed to dispersants used during a spill.

The Deepwater Horizon rig spilled more than 200 million gallons of oil into the Gulf of Mexico, and responders used nearly 2 million gallons of dispersant to break up the oil slicks. Dispersants helped keep oil slicks from reaching shore but at the expense of the water, where a great deal of chemicals stayed.

This study focused on coral larvae from reefs in the Florida Keys, home to the third largest barrier reef. While the oil from the Deepwater Horizon never reached the Keys, the studies illustrate what could happen if a spill ever affects that area. It also sheds light on how deep water corals closer to the spill could have been affected.

Coral larvae (mustard hill coral and mountainous star coral) were exposed to oil, the dispersant and a mixture of the two that researchers say is comparable to what could be found after a spill similar to the Deepwater Horizon. When hit by medium and high concentrations of oil and Corexit, (the dispersant), the baby larvae were unable to settle in rock, where they should have flourished but died instead.

The results of the Mote study and others that have questioned the use of chemical dispersants will be considered in federal contingency plans, a manual that outlines the pros and cons of each response.

Next: The Florida Department of Health’s Aquatic Toxins Program