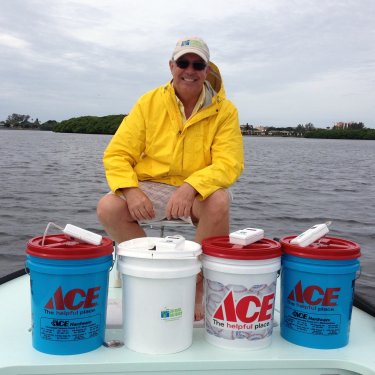 The Holiday Season is also Scallop Season! This is the beginning of Sarasota Bay Watch’s 4th season of bay scallop restoration, which is glad tidings indeed! Together with Bay Shellfish Company and Mote Marine Laboratory, we recently collected 200 adult scallops from areas north of Sarasota-Manatee to use as brood stock. These adults have spawned twice already! Ten days after spawning they are ready to be introduced into Sarasota Bay in the sea grass beds that will become their new homes. Already this scallop season SBW volunteers have released over 12 million scallop babies!

We have also saved some of the scallop larvae at the hatchery to continue growing into juveniles for release in early Spring, and we’ll keep growing some of those to young adults to put in protective cages (Scallop Condos) in the Summer. This 3 pronged approach helps increase the likelihood of the scallops surviving predators, under a range of environmental conditions, and boosts their chances of spawning naturally in the bay.

Since December of 2011, SBW volunteers have released over 80 million scallops larvae into the bay, along with over 100,000 juvenile scallop and more than 600 adult scallops nurtured in special cages. Thanks to all of our volunteers and supporters for another wonderful year!