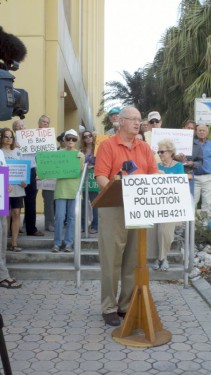 Joining with Sarasota County Commissioner John Thaxton, the Sierra Club and other concerned environmental organizations, Sandy Gilbert, START’s Chairman, spoke at a press conference in Sarasota on January 23 to appeal to state representatives on the Community and Military Affairs Committee to vote “No” on House Bill 421. The bill would exempt commercial fertilizer applicators from local ordinances with fertilizer bans during the summer “rainy season”. This “escape clause” would undermine all the good work done in 50 different municipalities around the state in reducing nutrient runoff in our bays and estuaries. The speakers at the press conference were given enthusiastic support from a gathering of local concerned citizens and the conference was aired on ABC’s Channel 7 and SNN 6 news  at 5:00 PM that evening. Other press conferences calling for opposition to HB-421 were also held in cities around the state including Fort Myers, Clearwater and Stuart.

Concerned citizens should email Rep. Jeffery Brandes  at jeff.brandes @ myfloridahouse.gov to express your concern about this threat to Home Rule and our marine environment.

Next: Genetic Susceptibility of Dolphins