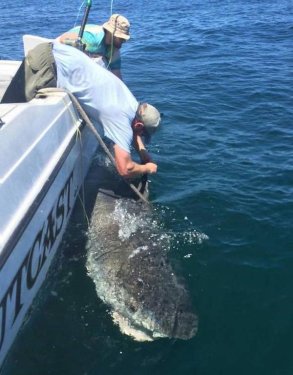 Shark tagging has come a long way since 1962 when the NOAA National Marine Fisheries Services Cooperative Shark Tagging Program was started. Back then sharks were tagged by fin tags or dart tags that are inserted into the animal. When the tagged shark was recaught volunteers would mail in information to the Program. Over 52 years later these methods are still being used but recent advances in technology have introduced satellite tagging and tracking.

OCEARCH, an organization studying great white sharks, is one of a few groups that have this technology. They use large barbless circle hooks to catch the sharks. The hooks are made of a special alloy that quickly degrades in salt water. The sharks are lifted onto a wooden platform where they are tagged. SPOT tags are implanted on the dorsal fin of the shark. The tags record temperature, salinity and depth. The trackers ping when the animals surface sending a signal to the satellite allowing the researchers to see the sharks. The tagging process takes about 15 minutes and provides real time tracking.

The multi-year project started by OCEARCH has many goals. They would like to better understand the shark’s life cycle and their movement patterns and why they go where they go. They are interested in their physiology and where they go to mate and give birth. They also hope to raise the awareness of the public to the great white’s plight and spur conservation efforts of the endangered ocean predators.

The Global Shark Tracker run by OCEARCH has its own website where three dozen tagged sharks can be followed. You can see each shark’s tangle of pings over several years and their movements over thousands of miles throughout the coastal Atlantic Ocean. The online map also tracks the sharks’ courses as they go.

There are five sharks actively traveling along the East Coast of the United States. The three most popular are Mary Lee, Lydia and Katharine, each of whom has attracted thousands of online fans. Mary Lee was tagged in 2012 and has traveled from Florida to Massachusetts and visited Bermuda. She has traveled almost 20,000 miles. Lydia has traveled more than 30,000 miles since she was tagged in 2013. Katherine topped 11,000 miles this past January.

Some of the sharks even have their own twitter accounts. Mary Lee has quite the following on Twitter with over 57,000 to date following her @MaryLeeShark handle. Katharines’ twitter handle is @Shark_Katherine and she has more than 16,000 followers. The twitter accounts are not affiliated with OCEARCH. But the organization credits the publicly shared shark tracker and social media with raising the public’s awareness of the plight of the great whites and changing the tone of the conversation.