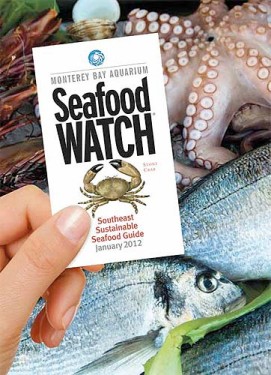 Monterey Bay Aquarium has announced that its Executive Director Julie Packard has been named one of “America’s 50 Most Powerful People in Food for 2012” by the influential website The Daily Meal, because of the impact the Aquarium’s Seafood Watch program is having on demand for sustainable seafood.

“Our ultimate criterion was simply this,” wrote Daily Meal editor and Saveur magazine founder Colman Andrews. “Is each person on our list capable, whether by dint of corporate station, media access, moral authority, or sheer personality, of substantially changing, improving, and/or degrading the quality and variety of the American diet or the way we think about it? If so, how absolute is the power he or she can bring to bear?”

In evaluating Julie Packard and the Aquarium’s influence, the editors concluded that because of the Aquarium’s pioneering efforts in the sustainable seafood movement, “Chefs and responsible consumers all over the country now consult its Seafood Watch list (in the form of wallet cards, a web site, and an app) of sustainable choices in fish and shellfish, thus impacting the seafood marketplace from coast to coast.”

Next: Improvements to Dona Bay Watershed